Getting To Lampi Island

Lampi island can be reached from either Myanmar or Thailand. From Myanmar, the quickest way to reach Kawthaung is by plane from Yangon. A number of airlines offer domestic flights from Yangon, which can take 2 hours (one stop in Dawei) or 2 hours and 40 minutes (with tops in Dawei and Myeik). The cost is around 210-250 $USD for the return ticket.

Improvements to the road between Yangon and Kawthaung have recently, the road journey from Yangon is long and involves 2-3 overnight stops.

From Thailand side, Kawthaung is reached via Ranong. The border crossing involves a long-tail boat ride to Kawthaung that takes approximately 20 minutes and costs around 250 Thai Baht. Day trips are also available from Kawthaung side. 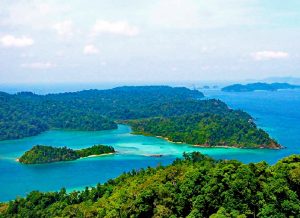 The best season to visit Lampi is from October to May during the dry season. From December to March, it is high season with pleasant northeast winds, hot and sunny weather during the day and cool temperatures overnight. This is a great time of year for sailing and fishing. Between April and May it is very hot, with little wind. There is great diving and migratory whales can also be seen during months. From June to September the Park is effectively closed, with heavy rain, strong winds and rough seas. Occasional showers can still occur in October and November.

The best sandy beaches of Lampi are located on the western side of the park, each and every one is a clean and sandy. If you are lucky, you can see monkey sitting on the beach leisurely snacking on crabs.

One of the longest, most accessible and stunning white beaches is on the southwest side of Lampi island. It stretches from the forest at the mouth of the mangrove tourist river. At low tide, when all the sandy beach emerges, you can walk for almost an hour to a nearby island. You will find yourself walking on long sandy strip, without footprints and with turquoise waters to both side.

Another extraordinary beach to the north is on Wa Ale island. Here you may come across turtles tracks between December and March. This beautiful wide beach is surrounded by hillsides of tropical evergreens and at low-tide has an interesting rock passageway at the southern end of the beach. On Wa Ale island, waves can be strong at times.

In the wide northernmost bay of Lampi island, the western horn of the bay protects a diverse and richly abundant coral community of hard corals sprinkled with giant clams. Here you can find pillow-shaped finger corals, table corals and massive bommies (coral outcrops) with stands of the blue coral Helipora. Numerous small, colorful fishes swarm around the edge of the reef.

The group of small islands in the middle of Lampi’s southern side are surrounded by fringing reefs formed by large boulder corals growing one on top of the other, forming vertical walls around the edges of the islands. These walls are adorned with an array of stag-horn and table corals, as well as come dramatic gorgonian fans.

Canoeing and Kayaking in the mangroves

Kayaking through Lampi’s serene and majestic mangroves is one of the highlights of any park visit. Lampi Park has two perennial rivers located on the western side of the main island, the so called “crocodile” and “tourist” rivers. These two rivers are home to Lampi’s best conserved mangrove forests. As you paddle along the rivers, deeper and deeper into the jungle, a mess of seemingly impenetrable, sprawling root systems extend as far as the eye can see. Lit by shafts of sunlight penetrating a dense forest canopy, these wonderfully enchanting ecosystems are home to a rich variety of bird, reptile and marine life – so have your cameras ready for chance sightseeing!

This activity is a special experience as kayaking provides the opportunity to quietly explore the winding creeks while listening the bird song and other jungle sounds. High-tide is the best time to visit as this allows deeper exploration of narrow passages. Paddling 1-2 hours after sunrise or 2-3 hours before sunset are also great time to enjoy the richest colors, the shimmering, dancing sunlight and to marvel at the intricate reflections mirrored in the glassy waters around you.

The islands in vicinity of Lampi host several sea shore caves. They are formed in Mesozoic Granite or Quartzite with passages oriented along the major bedding lines. This is surprising since caves are usually known from limestone which exists mostly in patches in the Mergui Archipelago.

A cave easy to visit is Kyun Thone Lone Gu located at the tiny island just 20 minutes of boat drive from Makyone Galet, in southwest direction. It consists of maze like passages of 214 m length and has a beautiful variety of water filled tunnels upper chambers and sandy beaches inside.

Access is by snorkeling into one of the three entrances. Most sea shore caves have single chambers or passages of 2040 m Length. They develop by a combination of weathering and dissolution and end abruptly. Such chambers are protected from wind and rain, provide therefore a perfect shelter for bat colonies of 50-100 bats.

Lampi and the village of Makyone Galet are key places for the Moken in the recent history of the Archipelago. The designated 1996 year of Tourism saw the development in Makyone Galet of a “Salone Ideal Village” Salone being the Burmese exonym for Moken.

This was a first attempt by the government to settle all the Moken from the Myeik Archipelago in one place. Burmese settlers were forced to move out, a village of bamboo huts aligned in rows was constructed, each row supposed to shelter a different Moken subgroup. However, the Moken would not stay and over the years the village has seen repeated attempts at a variety of relocation processes for both Burmese and Moken.

In the meantime, the anticipated tourism development did not occur. In 2004 the government organized Salone Festival for tourists. Again, this didn’t work to engage the Moken people with tourism and the festival did not continue in following years.

Over a period of twenty years (1980-2000), the five sub-groups present in the Archipelago were reconfigured under the pressure of the Burmese, and sometimes the Burmese army, who gradually took possession of the islands.

In Makyone Galet there are now two communities from two different Moken subgroups: Jait at the eastern part of the village and Lebi (Lampi) at the opposite side. Lampi (and Makone Galet village) is a privileged place to acknowledge and valorize Moken know-hows regarding natural resources management and their environment. As Moken society lives in accordance with its environment, managing the park also means taking into account Moken culture as a crucial element of its diversity. Eventually, the Lampi Marine National Park may be a valuable alternative to favor integration, a place of contact with the ‘outside’, a place where Moken can take an ethnic breath.