You are here: Home / Blog / The Beautiful Cities of Chin State, Myanmar

Chin State is the mountainous and remote region which is located in the western part of Myanmar, Chin State is one of the poorest region in the country bordering with Bangladesh and India. The capital of Chin state is Hakha and population is 0.47 million, they speak mostly Tedim and Lai. Christianity is the major Religion of Chin state and some are Theravada Buddhism. There are nine township, Hakha, Falam, Thantlang, Tedim, Tonzang, Matupi, Mindat, Kanpetlet and Paletwa. New Surbung Airport in Falam is still under construction and expected to finish in May 2020.

Falam is the capital of Falam District, Nothern Chin Sate. It is built on the slope of a mountain range, in multiple steps. The city is quite clean, tidy and living standard is quite high. There is a good place to learn and visit Chin Chief’s Traditional House about 24 km from Falam.

Thantlang township is located 40km from Hakaha. The city sits between the Vuichip and Marau Mountains. Thantlang’s borders extend to Mizoram’s edge in India. The city’s water flows is from the nearby Buhva and Lahva rivers. Paddy fields dot Lahva’s banks, regularly plowed by local farmers in June and harvested by the end of October.

Tedim is the largest administrative town of Tedim Township and located in the north of the Chin State. The name “Tedim” was derived from a pool up in the hills that used to twinkle in the sunlight, therefore it was called  “Te (bright, shine)” and dim (twinkling, sparkling) in the local Zomi language. The major tribe of Tedim is Zomi. There are dams, caves, peaks and other attractions, including Leupa Mural, the Twin Fairy Hill and historic sites.

Hakha is situated in Northern Chin State. It is situated on the slope of a large mountain, at 1890 m above sea level and built-in U shape. The cloud covers most of the lower parts of the city in the rainy season and winter, so the city looks like it is built on the clouds. It is quite cold and very windy during the winter. The whole city is foggy in the morning and in the evening. The best time to visit Hakha is in summer.

The main roads from Matupi are the one that goes to Mindat is 102 miles long and the other one goes to Hakha is 173 miles long. Both roads leading to Matupi are not well-paved roads. There is beautiful scenery along the roads. Matupi is extremely amiable and affectionately beautiful. It is home to several tribes. Matupi has much to be explored. The virgin environments of the Matupi are breathtakingly charming. 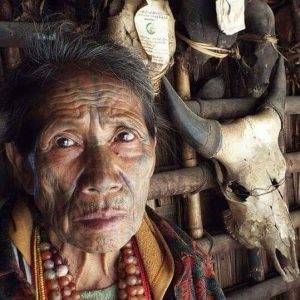 Mindat, the easiest reach town in Chin Hills, is a beautiful, peaceful, tranquil town and situated in the southern part of Chin Hills. It is situated at 1482 m above sea level and trading hub for southern Chin State. Tall pine tree lines the approaching road while distant mountain shadow the town. Then there will be small, beautiful wooden houses with scenic backdrop along the main road.

Kanpetlet, a small town probably the smallest town in Chin State, is in the southern Chin State. It is built on the slope of the mountain with large mountains overshadowing. The scene from the town is very beautiful, especially before the sunset. During winter, the mountains are covered in thick fog, transforming the whole town into a small paradise.

Kanpetlet is still unspoiled by the modern world and a very good place to observe the Chin traditional way of life. People are still living, in the same way, hundreds of years ago. This is also a very nice place to start trek to Mt. Victoria and some decent hotels can be found near the town. In near Kanpetlet, there has Mount Victoria National Park. It is better to use Kanpetlet as the base camp to watch birds and butterflies (especially beautiful in this area).