You are here: Home / Blog / Famous Festivals in Myanmar

Most of the famous festivals in Myanmar are cultural and religious in Nature, reflecting the country’s deep spirituality as well as important social events. Many festivals are related to pagoda festivals that people from the surrounding towns and villagers come. 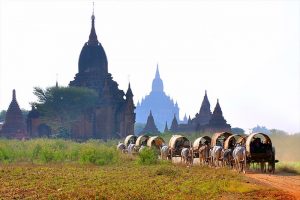 This is one of the most famous pagoda festivals in Bagan. Since the Bagan period, people continuously held the great Ananda pagoda festival every year. Long ago, people from many villages around Bagan came to the festival in and made camps for the whole duration of the festival. Definitely, visitors can enjoy the traditional lifestyle of the locals during this time.

The Kachins, one of the major races of Myanmar, take a great part in this festival and many Kachins from abroad come back to meet and dance at this special event. The Kachin Manaw festival in Myanmar is very famous, traditional dance is performed at Manaw Festival which originated as part of the Nat or spirit worship of the past.

Naga New Year Festival is one of the rarest festivals in Myanmar. There are more than 49 different clans in Naga Tribe with their own distinctive dresses and dialects. They gather annually to celebrate the New Year which falls on January 15. Package tours are available to visit the Naga New Year Festival.

Thingyan (The Water Festival) is the most exciting and interesting occasion for merry-making with the largest number of people taking part in it throughout the country. During the Thingyan festival, people pour water over one another to the melodious tunes of singing and dancing at the decorated party pavilions. Pouring water signifies cleansing the body and mind of evils of the past year.

The only inhabitants in Myeik or Mergui Archipelago of Myanmar are Sea Gypsies namely Salon (Moken). They live on boats during the dry season and remain on land during the rainy season. They still practice the same fishing and boat building techniques used for generation. Even they are living in the sea for most of the time, they have their traditions, customs, cultures and their localized traditional festival. During the festival, all villagers gather at the villages, offer foods and pray for their better on business, good luck for good health and more prosperous for the coming season. They are also enjoying their meals, drink, and dance traditionally during their festival. 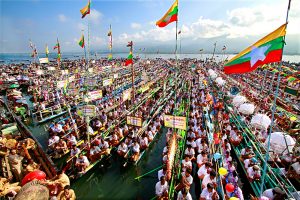 Paung Daw Oo Pagoda festival can be seen  18 days in September or October, it is one of the famous principal pagodas which houses five Buddha images. This pagoda is the main attraction to locals in Inle Lake and situated in the middle of the Lake. Thousands of people from communities around the lake and villages in the surrounding mountains carry fruits and flowers on lacquer trays in their own boats and pay homage as the holy barge passes. Teams of the lake’s famous one-legged rowers compete in annual boat races.

The most spectacular event of the year is the Hot Air Balloon Festival held 3 days during every November in Taunggyi. Thousands of local pilgrims and international tourists choose to visit Taunggyi, especially to watch scores of giant paper animals being inflated and floated off into the sky. The competitions run during the day and at night when the sky is colorfully illuminated with hot air balloons. Balloons in the shape of elephant, ox, horse, water buffalo, bird, pig, fish, owl and parrot are sent up into the sky.