Three of the Pyu ancient cities are the first site in Myanmar being inscribed on the World Heritage list during the 38th session of the World Heritage Committee held in Doha of Qatar in June 2014. It is comprised of three brick walled and moated cities of Hanlin, Beikthano and Sriksetra in the vast irrigated landscape of the dry zone in Ayeyarwaddy river basin.

They represent the Pyu Kingdoms that were prosperous for over a thousand years between BC 200 and A.D.900. Three sites have been partially excavated revealing palace citadels, burial grounds, early industrial production sites, brick Buddha stupas, and water management features. 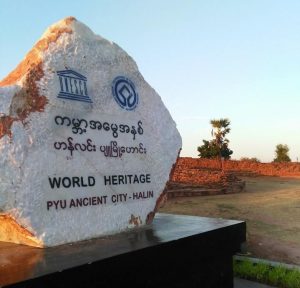 How to get there

Located 70 miles away from Mandalay, 11 miles from Mandalay-Shwebo road. And It is a remarkably large area, 3.2 km from north to south and 1.6 km from east to west. Hanlin Pyu Ancient City has founded the most abundant evidence of pre-urban prehistoric habitation.

The most prominent features of this square shape building are the standing stone slabs. The stones are erected in 3 rows on the northern, eastern and southern interior wall. This structural remain is sophisticated forms of stone and brick ritual structures. It is also unique evidence for assimilation of Buddhism with traditional beliefs in Pyu Ancient Cities.

One excavation unearthed a huge assembly hall with a brick platform and 84 wooden pillars. Artifacts such as pottery, terracotta beads, and semi-precious stones were frond here. The interior includes the walls of the platform, earthen ramparts of the reservoir and a well.

This is located in the southern part of the city. Excavations have revealed evidence of certain burial practices such as orientating the head to the north, the burial of Jewelers pottery.
According to the buried skeletons existing in depths of layer by layer, hence this graveyard might have been used for successive periods datable to 2000 to 5000 before present (BP).

The ancient brick walled city is shaped more nearly like a square. The brick fortified walls encompass the city area on the north, east and south sides but the western wall has not yet been confirmed by archaeological excavation, the whole walled area of the city is some 900 hectares. 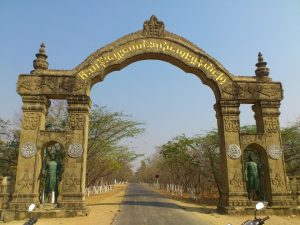 One of the distinctive characteristics of the Pyu cities is the presence of a sizeable central palace citadel. A rectangular structure, containing five small and one medium-sized chamber was found and is also thought to be storage facilities.

All there structural remains are clearly identified to the religious architecture of Buddhism and this proves that was Buddhism was here since more than 1500 years ago.

How to Get there

This city is approximately 5 miles southeast of Pyay and can be accessed by road. It can also be accessed by rail from Yangon. Twice as Large as Halin and the most elaborately constructed, Sri Kestra is considered as the most important & influential of the ancient cities.

As the 6th – 7th Century AD remaining architecture, Bawbawgyi stupa is the earliest Buddhist monument among the existing of Myanmar. The two below have the unique conical shape and style was significantly transformed in the architectural development of Bawbaw Gyi.

Other aspects of Pyu cultural heritage are both accessible and impressive. The Pyu had already mastered three important aspects of ancient economic life water control, brick making, and iron working. Near the center of each Pyu city lays a well-fortified citadel or palace city. The palace has an enclosing moat linking many radiating and concentric canals.